Let's start with a little essay:

“Since ancient times, clapping has always been deeply associated with music: From the rhythmic clapping at tribal gatherings or concerts, to the iconic clap sound in drum machines. But the ‘high five’ clap signifying shared achievement, closely related to the handshake signifying agreement or mutual appreciation, is another positive association. And that metaphor transcends the duality between host application and plug-in, which meet as equals in CLAP.”

and let's round it off with the logo:

The logo is basically an infinity symbol inside a triangle. The symbol is broken so it looks like a twisted band. Due to its position and tilt, the left half forms the letter “C” while the right half forms a “P” – the first and last letters of CLAP. Also, the two blobs in the middle resemble musical note symbols. 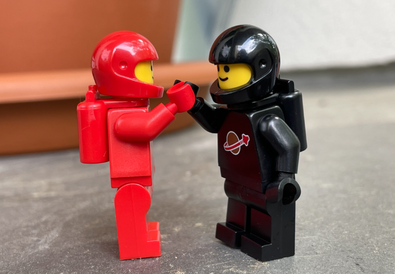 Then there’s the “high five” association of clapping, which I also see in the symmetry of c and p coming together – which is perhaps wishful thinking on my part: It may have worked better if human hands more closely resembled those of Lego minifigures.

Audio associations are also welcome: The sound of clapping easily associates with a plug-in snapping into the host, as if a virtual hardware cartridge was inserted into some kind of virtual console.

Lastly, clapping is also the foundation of applause, which I'll have for the whole team who worked more than a year on this.

This update link alerts you to new Silvrback admin blog posts. A green bubble beside the link indicates a new post. Click the link to the admin blog and the bubble disappears.